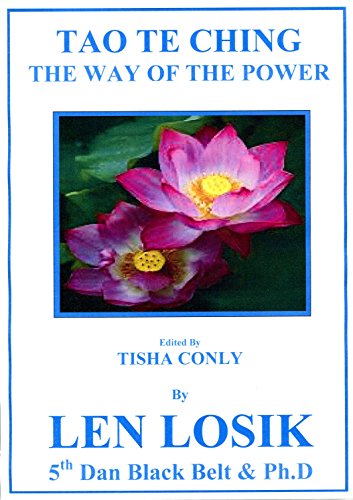 Tao Te Ching: The Way of the Power

Tao Te Ching The Way of the Power is referred to as the Laozi and is one of only several ancient Chinese texts that allows us a small window into the minds of the ancient scholars and how they passed their knowledge and wisdom on to the few that desired to hear it. Unlike the West, the East's culture is one of forgetting the past every 12 years and look to the future. This cultural behavior is one that keeps the people with hope so that their culture survives even through catastrophes that occurred thru history in every facet of their society. The East was a great warring region starting with the Hsiung-nu tribesmen that eventually became the Mongols, with constant invasions and ruthless slaughter of the Chinese people over many thousands of years providing the motivation for building and expanding the Great Wall of China that used to bring peace for a brief period in the unknown history of the Asian society. with no self protection, the people suffered great atrocities, the ruling families owned the only military and the well armed military were used to humiliate enemies and show disrespect and dishonor by their enemies losing in battle. The Asian culture focuses on respectful and honorable behavior in all facets of society and so when one warring family would win in battle, the losing military would commit suicide on the battlefield hoping to recover their honor and respect from the conquering army. Villagers, if not killed on the battlefield were slaughtered by the barbarians from the north. The text's authorship and date of translation is unknown. The oldest copy dates to the late 4th century BCE, when Adam and Eve were in the Garden of Eden in Babylonia in today, Iraq, Cain kills his brother Abel and the bronze age brings better weapons for men to kill in battle. The Way of the Power was reduced to just 34 chapters from 81 by the author compressing the many words needed to translate each character needed for translation of used by the ancient Asian culture to store and pass on a little of society's wisdom and knowledge, but its been updated with 21st century Psychology, Physics, Engineering, Communications Science and Christian theology. The Tao Te Ching contrasts what the West developed in its vast libraries and books on science, philosophy, architecture, history, etc during the same period to do the same. The ideas of the Tare condensed to the singular; the style is poetic. The rhetorical style combines short, declarative statements and intentional contradictions for the reader to exercise reasoning and problem solving. The first lines create memorable phrases, while the second forces the reader to create their own contradictions. The Tao Te Ching The Way of Power is one of just a few fundamental text for Taoist, Legalists, Confucius, Daosts and Buddhist to study as the Christian Bible is studied. When the Tao Te Ching was introduced, it was interpreted through Daoist words and concepts. The author includes original Chinese art works including poetry, paintings, calligraphy and gardens. Many artists used the Tao Te Ching for inspiration. Its influence spread far outside of Asia, and is among the most translated text in world literature and the least understood du. The Wade–Giles romanization for the "Tao Te Ching" dates back to the late 19th century; where its influence can be seen in the words and phrases that the West added. The passages are purposefully ambiguous, and topics range from political advice for rulers to practical wisdom for the everyday people. Because the variety of interpretation is limitless, not only for different translators but all for the same person's re-translation over time, readers must avoid objectivity or definability. The Tao Te Ching is for those that want a mind expanding experience, one that broadens one's understanding of the world as the world was understood over 6,000 years ago with passages that still remain relevant to today's experiences. Includes a long list of suggested readings.