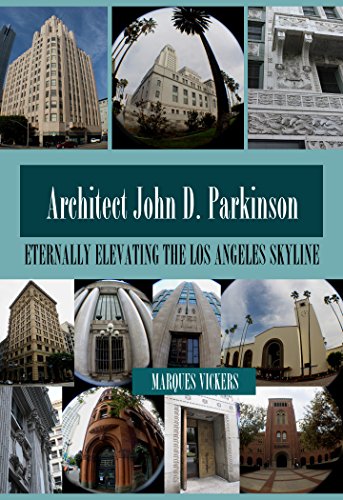 Vickers photographs thirty-six of his standing projects and provides background details on their origins and design.

Following four years of steady commissions in Seattle, Parkinson uprooted his practice to Los Angeles in 1894 following a series of financial reversals. Over the next forty years, he was credited with over 200 projects. Fifty remain today creating a blueprint for twentieth century Los Angeles modernism. Despite his achievements, output and recognition during his era, his name is nearly forgotten amongst memorable architects.

Parkinson died in 1935 and both his son and grandson, who carried on his practice died within in twenty years. Their premature passing contributed towards his name receding from public recognition. Many of his prominent skyscrapers formed the core of Los Angeles’ downtown financial, theatre and shopping districts. The decline of these sectors during the 1960s into squalor and vice further diminished his reputation.

A current revitalization of Spring and Broadway Streets has renewed appreciation for Parkinson’s classic designs and aesthetic contributions.

The edition traces the improbable evolution of a master architect from his modest Lancashire, England background. Parkinson left school at thirteen, apprenticed with a Bolton architect while studying evenings at the local Mechanics Institute. His eventual immigration to America included formative stops in Winnipeg, Canada, Minneapolis and Napa. His genius and innovation first emerged in Seattle through Romanesque Revival styling. His classic Los Angeles designs were articulated through Beaux Arts, Spanish Renaissance and Art Deco.