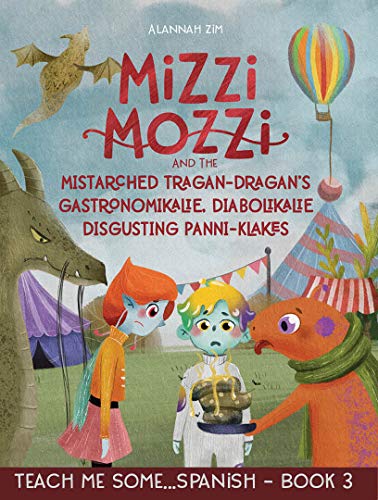 In Book 3 of the Mizzi Mozzi "Teach Me Some...Spanish" series, Mizzi Mozzi and her best friends Flip-Flop and Lekko are on their way to the Panni-Klake Festival-Flair, ready to eat lots-and-loads of yummy Panni-Klakes, listen to fabulous-marvelous musics and see the best showy-shows in all of Mizzipotazia,.

But Mizzi Mozzi, Flip-Flop and Lekko aren’t the only ones one their way to the Panni-Klake Festival-Flair. Because also on their way from the dark and sludgy Ignus Fartus Smudge-Sludge Swamp are the mean and bad-tempered Mistarshed Popo-Paglian Tragan-Dragans, who don’t plan to be very nice when they get there!

With help from the Cheeka-Peeka Absurd-Birds, Mizzi Mozzi comes up with a plan to scare the Tragan-Dragans away forever. But will they fall for Mizzi Mozzi’s trick?

The “Teach-Me-Some... Spanish” series of MIZZI MOZZI books is a fun and exciting method of introducing some of the most common Spanish words to children aged 3-8. No previous knowledge of Spanish by either the adult reader or young child is required.

Each beautifully illustrated MIZZI MOZZI adventure story introduces around twenty Spanish words and includes their correct Spanish spelling and simple English phonetic help for correct Spanish pronunciation. For e-Books only, you can tap on the foreign language word to hear the spoken audio.

ABOUT THE MIZZI MOZZI “TEACH-ME-SOME” SERIES

The “Teach-Me-Some” series of Mizzi Mozzi printed books (in both paperback and hardback editions) are available to order or purchase in over 165 countries in more than 35,000 outlets and also via on-line retailers such as Amazon.

The “Teach-Me-Some” series of Mizzi Mozzi e-books are available through more than 100 e-retailers worldwide, including Amazon Kindle, Apple iBooks, and Kobo.

The “Teach-Me-Some” series of Mizzi Mozzi audiobooks are available through Audible.