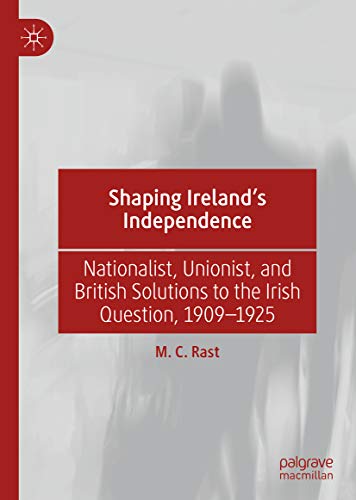 This book explores the political and ideological developments that resulted in the establishment of two separate states on the island of Ireland: the Irish Free State and Northern Ireland. It examines how this radical transformation took place, including how British Liberals and Unionists were as influential in the “two-state solution” as any Irish party. The book analyzes transformative events including the third home rule crisis, partition and the creation of Northern Ireland, and the Irish Free State’s establishment through the Anglo-Irish Treaty. The policies and priorities of major figures such as H.H. Asquith, David Lloyd George, John Redmond, Eamon de Valera, Edward Carson, and James Craig receive prominent attention, as do lesser-known events and organizations like the Irish Convention and Irish Dominion League. The work outlines many possible solutions to Britain’s “Irish question,” and discusses why some settlement ideas were adopted and others discarded. Analyzing public discourse and archival sources, this monograph offers new perspectives on the Irish Revolution, highlighting in particular the tension between public rhetoric and private opinion.