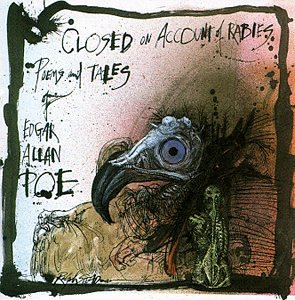 Closed on Account of Rabies: Poems and Tales of Edgar Allan Poe

One of the true marks of a horror artist is to create something that is at once completely terrifying and utterly fascinating. It's not about blood, guts, and gore, as anyone who's ever seen Psycho could tell you, but about suspense, story, and the characters themselves. Edgar Allan Poe's stories rank as some of the greatest horror ever written--and that's before the likes of Iggy Pop, Diamanda Galás, Abel Ferrara, and Christopher Walken (chilling, as he reads from "The Raven") got their hands--er, voices--on Poe's words. This two-disc compilation is a success if only for treating Poe's texts in the right manner, with subtle backing music and sounds and restrained, ominous performances from the readers (other fine readings come from Ken Nordine, Dr. John, and Jeff Buckley). One reason for the album's quality may be producer Hal Willner; if you enjoy this, you might also want to check out his work on Weird Nightmare: Meditations on Mingus, The Carl Stalling Project, Vol. 1, and Spare Ass Annie. --Randy Silver