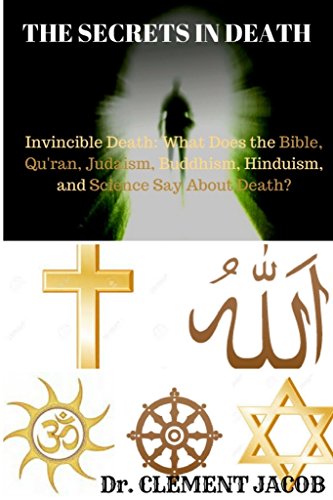 THE SECRETS IN DEATH: Invincible Death: What Does The Bible, Qu’ran, Judaism, Buddhism, Hinduism, and Science Say About The Inevitable Death?

Do You Know What The Bible, Qu’ran, Judaism, Buddhism, Hinduism, and Science Say About The Inevitable Death?

Every time I go online, I see people posting the death of their loved ones. These could be the death of a father, mother, brother, sister, friend etc. yet nobody seems to talk about death.

The only certain thing in life is death but we are so scared to talk about it. Despite the fact that it is inevitable, we try as much as possible to abstain from talking about it or pondering it. And all of a sudden, it happens to someone precious to us.

What do we do? Nothing! We can't cope any longer than to mourn.

I offer this book as an answer to a lot of rhetorical questions like:
- what is death?
- Is death inevitable?
- Why do we mourn the dead knowing the fact that it's inevitable?
- What does the five major religions, and science say about death?
- Where and how will you like to die? And what will you be remembered for?

This book will help you to stop wasting the short and precious time given to you on this wonderful planet, afraid of the inevitable death, and live every single minute of every single day purposefully as if it were your last.

Tags: death, on death and dying Elisabeth Kübler-Ross from here to eternity, the denial of deathErnest Becker,no death, no fearDeath, on death and dying, from here to eternity, the denial of death, no death, no fear, lifetimes, death, death in the air,death on the nile, death march to the parallel world rhapsody, death comes for the archbishop, death of an heir, death in the stacks, death ship joseph badal, death in st Petersburg, death of expertise, death in venice, homo deusYuval Noah Harari, letting go, David R. Hawkins, the art of loving, you are not so smart, the power of meaning, Emily Esfahani Smith, creative writing - from think to ink, Simeon Lindstrom, the origin of consciousness in the breakdown of the, Julian Jaynes, invitation to sociology, the nature of consciousness, in praise of folly, Desiderius Erasmus, the book, the top ten things dead people want to tell,Mike Dooley, the bond,the consolations of philosophy, strangers, gods and monsters, Richard Kearney, thus spake Zarathustra, humanism love, the albert einstein collection, Albert Einstein the edge of reason, Julian Baggini, how to bend the youniverseand the totality of everything, radical wholeness, everyday emerson, when breath becomes air, being mortal, the last lecture, smoke gets in your eyes, Caitlin Doughty, coming home again stiff, Mary Roach, the education of a coroner, John Bateson, confessions of a funeral director, Caleb Wilde, a grief observed, C. S. Lewis, five days at memorial, Sheri Fink, rest in pieces, Bess Lovejoy, answers about the afterlifeBob Olson, on grief and grieving, Elisabeth…, the denial of deathErnest Becker, lessons from the light, final gifts, Maggie Callanan, dyingCory Taylor, one minute after you die, Erwin W. Lutzer, 199 cemeteries to see before you die, modern loss, walking through twilight, the unbound soul, inspirience, inner engineering,Sadhguru other minds, being aware of being aware, Rupert Spira, codependency - “loves me, loves me not”,, the soul's code, the happiness hypothesis, why can't we be good?, lost knowledge of the imagination, Gary Lachman metaphors, we live by, myths to live, dare to matter, from bacteria to bach and back, big mind, beyond the self, more beautiful than before, glimpses of heaven, tiny beautiful things, the year of magical thinking, option b, renewing your mind, you can heal your life, Louise L. Hay, rethinking possible, the 13th gift, supernormal, the transformative power of near-death experiences, the five invitations, there is no good card for this, just this side of heaven, tuesdays with morrie, return from tomorrow, it's ok that you're not ok, Megan Devine, the tibetan book of living and dying, the 13th