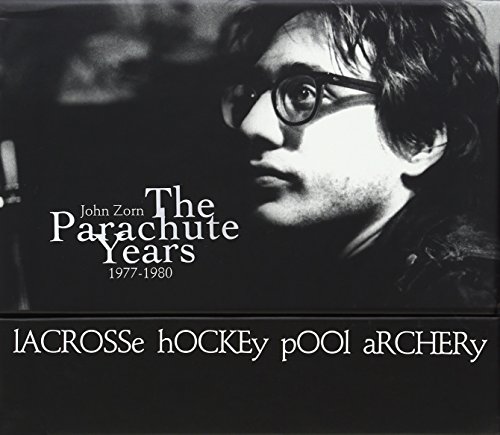 Just three short years after his 1973 home recordings, Zorn had devised a series of complex game structures that challenged improvisers in ways no one had thought of before. Pulling together influences from classical music (Brown, Cardew, Kagel, Stockhausen) and the AACM (Braxton, Smith, Mitchell) Zorn's scores forged a sound world of striking originality thanks to the virtuostic brilliance of the musicians he worked with.
Issued on a private label in limited editions of 1000 copies, these are the recordings that f***** everyone up in the first place. From 1978-1981, Zorn produced three 2 LP sets of his game compositions for Eugene Chadbourne's Parachute Label. They are included here in a newly remastered edition along with hours of outtakes, rehearsals and other rarities. Among the musicians who rose to the challenge of playing these early esoteric compositions are Eugene Chadbourne, Polly Bradfield, Bob Ostertag, Bill Laswell, Henry Kaiser, George Lewis, Wayne and Bill Horvitz, Kramer, Robert Dick, Anthony Coleman, Tom Cora, Davey Williams and many, many others.