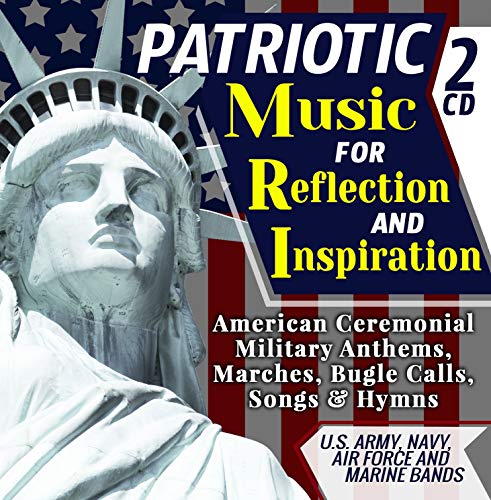 &nbspIf you want to feel patriotic then this collection is for you! 40 brilliant patriotic mood creating musical tracks performed by the U.S. Military’s World Class Bands. Now you can make any day feel like the 4th of July!

&nbspIt’s not all “full charge ahead” type music though. The collection is split into 2 CD’s of 20 tracks each. CD2 is designed to pump and bolster, with uplifting, inspirational and motivational tracks to really get you up and going. But CD 1 is designed to put you in a calm and reflective mood, it’s for prayer, reflection, and gratitude.

&nbspAnd some of the prayers and songs, such as “Eternal Father”, “God Of Our Fathers” and the a capella “Ave Maria” are simply beautiful and incredibly moving. And there’s a powerfully stirring version of “Battle Hymn of The Republic”.

&nbspOf course the American National Anthem, The Star-Spangled Banner, is included and other favorites such as two wonderfully moving performances of “America The Beautiful”. One is instrumental, the other with vocals.

&nbspThere is an International flavor with “Pomp And Circumstance March” and “Auld Lang Syne”, but the bulk is from great home grown American talent, such as Sousa, Fillmore, Gilmore, Mason, Howe, Bates, and many more. I defy you not to whistle along to Gilmore’s “When Johnny Comes Marching Home”.


There’s a 32 page booklet that details these and many more fascinating facts about the tracks.
We hope you enjoy listening as much as we reveled in choosing the tracks.

Click the button above and add to your cart now to make sure you have for the next 4th of July!