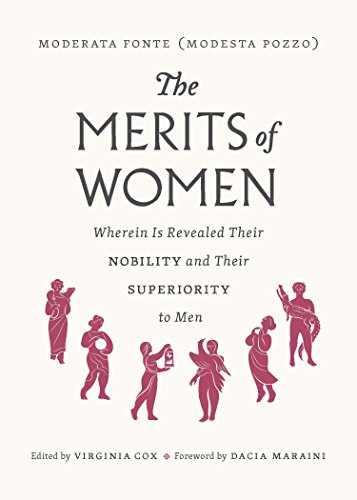 The Merits of Women: Wherein Is Revealed Their Nobility and Their Superiority to Men

You would as well look for blood in a corpse as for the least shred of decency in a man . . .

Without help from their wives, men are just like unlit lamps . . .

Just think of them as an unreliable clock that tells you it?s ten o?clock when it?s in fact barely two . . .

These are but a small selection of the quips bandied about at this lively gathering of women. The broad topic at hand is the relative pros and cons of men, and the cases in point range from pick-up artists to locker-room talk, and from double standards to fragile masculinity.

Yet this dialogue unfolds not among ironically misandrist millenials venting at their local dive bar, but rather among sixteenth-century women?variously married, widowed, single, and betrothed?attending a respectable Venice garden party. Written in the early 1590s by Moderata Fonte, pseudonym of the Renaissance poet and writer Modesta Pozzo, this literary dialogue interrogates men and men?s treatment of women, and explores by contrast the virtues of singledom and female friendship. As the women diverge from their theme?discussing everything from astrology to the curative powers of plants and minerals?a remarkable group portrait of wisdom, wit, and erudition emerges.

A new introduction by translator Virginia Cox and foreword by Dacia Maraini situate The Merits of Women in its historical context, written as it was on the cusp of Shakespeare?s heyday, and straddling the centuries between the feminist works of Christine de Pizan and Mary Wollstonecraft. Elegantly presented for a general audience, this is a must-read for baby feminists and ?nasty women? alike, not to mention the perfect subtle gift for any mansplaining friend who needs a refresher on the merits of women . . . and their superiority to men.