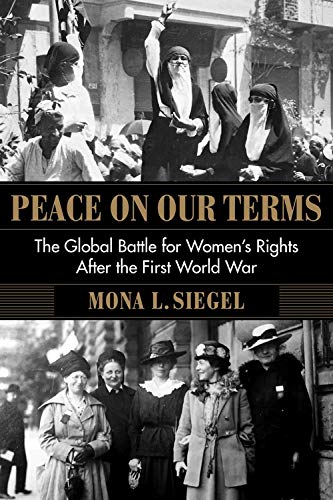 Peace on Our Terms: The Global Battle for Women's Rights After the First World War (Columbia Studies in International and Global History)

In the watershed year of 1919, world leaders met in Paris, promising to build a new international order rooted in democracy and social justice. Female activists demanded that statesmen live up to their word. Excluded from the negotiating table, women met separately, crafted their agendas, and captured global headlines with a message that was both straightforward and revolutionary: enduring peace depended as much on recognition of the fundamental humanity and equality of all people—regardless of sex, race, class, or creed—as on respect for the sovereignty of independent states.

Peace on Our Terms follows dozens of remarkable women from Europe, the Middle East, North America, and Asia as they crossed oceans and continents; commanded meeting halls in Paris, Zurich, and Washington; and marched in the streets of Cairo and Beijing. Mona L. Siegel’s sweeping global account of international organizing highlights how Egyptian and Chinese nationalists, Western and Japanese labor feminists, white Western suffragists, and African American civil-rights advocates worked in tandem to advance women’s rights. Despite significant resistance, these pathbreaking women would leave their mark on emerging democratic constitutions and new institutions of global governance. Drawing on a wide range of sources, Peace on Our Terms is the first book to demonstrate the centrality of women’s activism to the Paris Peace Conference and the critical diplomatic events of 1919. Siegel tells the timely story of how female activists transformed women’s rights into a global rallying cry, laying a foundation for generations to come.