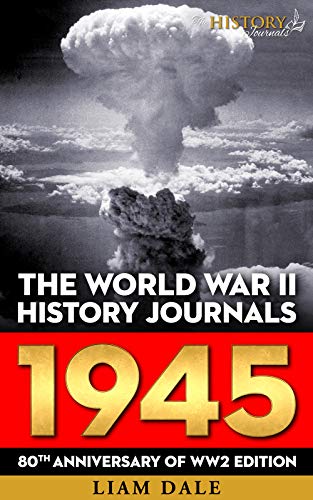 Do you want to learn more about World War II, but don’t have time to read huge, long books? Then let The History Journals take you on an hourly history tour of each year of the war with The World War II History Journals series which includes one book per year from 1939 to 1945.

Throughout this series of journals released to acknowledge 80 years since the beginning of WW2, we will be looking at the seven years of that conflict on an annual basis. The conflict, the buildup to war, the major battles, the strategies and technological developments, the effect on civilians and most importantly of all we’ll consider the role of the soldiers, sailors and airmen who gave their lives fighting for the freedom of others.

Although the Allied nations faced the New Year of 1945 with a huge sense of hope, there was still a great deal of work to be done if world peace was to become a reality. Adolf Hitler and his Axis powers were finally facing defeat after seven years at war, but just like any wounded animal in the wild, they continued to pose a very real and dangerous threat. Follow us onward into the history of WW2 in 1945 – and the end of the war.

✔️ You will learn about:

Be sure to read all the books in the WW2 Timeline series – one for each year through the end of the war in 1945! And please don’t forget to leave us a review! ✍️

The History Journals
We create enlightening History Books for people looking to learn about topics in a Quick Study Guide format. Our books won’t take you days to read (or listen to) – but can be enjoyed over a cup of coffee and an hour or so of your time. They are the perfect starter to see if you’d like to delve deeper into any specific subject.