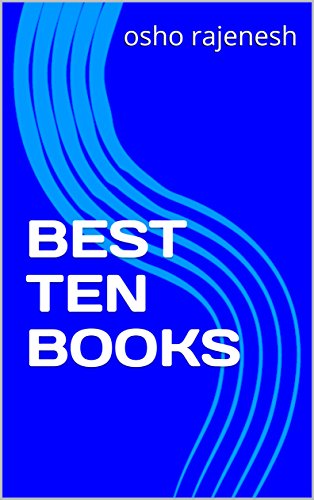 THUS SPAKE ZARATHUSTRA. I love very few books; I can count them on my fingers.... THUS SPAKE ZARATHUSTRA will be the first on my list.
THE BROTHERS KARAMAZOV is the second.
Third is THE BOOK OF MIRDAD.
Fourth is JONATHAN LIVINGSTON SEAGULL.
The fifth book is TAO TE CHING by Lao Tzu.
The sixth is THE PARABLES OF CHUANG TZU.
He was the most lovable man, and this is the most lovable book.
Seventh is THE SERMON ON THE MOUNT – only THE SERMON ON THE MOUNT not the whole Bible. The whole Bible is just bullshit except THE SERMON ON THE MOUNT. Eighth... is my numbering right? That’s good. Then you can feel that I am still in my insanity.
The eighth, BHAGAVADGITA – the divine song of Krishna. By the way ’Christ’ is only a mispronunciation of ’Krishna’ just as ’Zoroaster’ is of ’Zarathustra’. ’Krishna’ means the highest state of consciousness, and the song of Krishna, the BHAGAVADGITA, reaches to the ultimate heights of being.
Ninth, GITANJALI. It means ’an offering of songs’. It is the work of Rabindranath Tagore, for which he got the Nobel prize.
And the tenth is the songs of Milarepa – THE ONE THOUSAND SONGS OF MILAREPA – that’s how it is called in Tibetan. No one spoke. The host, the guest, nor the white chrysanthemum


CHAPTER 1.
Ahhh!... so beautiful... the white chrysanthemum. Aahhh, so beautiful. Words are so poor. I cannot describe what is being brought to me. The white chrysanthemum. No one spoke. The host, the guest, the white chrysanthemum. Good. Because of this beauty, my ears are incapable of even hearing the noise, my eyes are filling with tears. Tears are the only words the unknown can speak, the language of silence. Books I Have Loved 5 Osho CHAPTER 2 1984 in Lao Tzu House, Rajneeshpuram, Oregon, USA I apologize because this morning I did not mention a few books that I should have mentioned. I was so overwhelmed by Zarathustra, Mirdad, Chuang Tzu, Lao Tzu, Jesus and Krishna that I forgot a few of the books which are even far more significant. I could not believe how I could forget Kahlil Gibran’s THE PROPHET. It is still torturing me. I want to unburden – that’s why I say I am sorry, but not to anybody in particular. How could I forget the book which is the ultimate: THE BOOK of the Sufis! Perhaps I forgot because it contains nothing, just empty pages. For twelve hundred years Sufis have been carrying THE BOOK with tremendous respect, opening its pages and studying it. One wonders what they study. When you face an empty page for a long time, you are bound to rebounce upon yourself. That is the real study – the work. How could I forget THE BOOK? Now who will forgive me? THE BOOK should have been the first to have been mentioned not the last. It cannot be transcended. How can you create a better book than one which contains nothing, and the message of nothingness? Nothingness should be written in your notes, Devageet, as no-thing-ness; otherwise nothingness has a negative meaning – the meaning of emptiness, and that’s not it. The meaning is ’fullness’. Emptiness in the East has a totally different context... SHUNYATA. I called one of my sannyasins Shunyo, but the fool goes on calling himself Doctor Eichling. Now, can stupidity be greater? ’Doctor Eichling’ – what an ugly name! And he has shaved off his beard just to be Doctor Eichling... because with a beard he was looking a little beautiful. In the East shunyata – emptiness – does not mean emptiness as in the English language. It is fullness, overfullness, so full that nothing is needed any more. That is the message of THE BOOK. Please include it in the list. 6 CHAPTER 2. First, THE BOOK of the Sufis. Second, THE PROPHET by Kahlil Gibran. I could easily drop THE PROPHET for the simple reason that it is only an echo of Friedrich Nietzsche’s THUS SPAKE ZARATHUSTRA. In our world nobody speaks the truth. We are such liars, so formal, so full of etiquette.... THE PROPHET is only beautiful because it echoes Zarathustra. Third, THE BOOK OF LIEH TZU. Lao