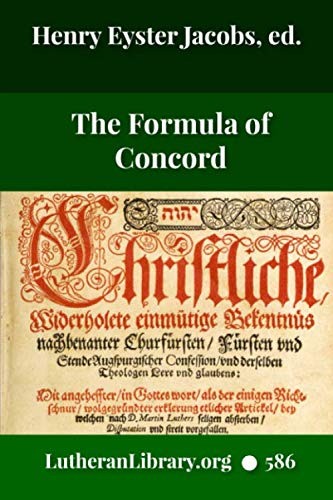 The Formula of Concord

"[The Formula of Concord] is the result of controversies within the Lutheran Church after the breach with the Papacy had become complete… It required more than a single generation for the Evangelical faith in all its power to penetrate the minds and lives of even its staunchest adherents; and when we recall the deplorable condition into which the Church had fallen, and the deep ignorance not only of the people, but also of the ministry, described in the introductions to the Catechisms, we cannot wonder at the subsequent internal struggles, when the controversy with the Papists absorbed less attention…

"Political intrigues added their elements of discord, and pressure was brought to bear upon the Church to shape her faith according to the desires of civil rulers for state alliances.

"Men of amiable temper or desponding hearts, were flattered or terrified into making concessions for the sake of peace, in which while they imagined they were yielding little, they were yielding everything… For when for the sake of peace men are willing to yield to Rome so far as not only to consent to the reintroduction of all the superstitious ceremonies of the Mass, but even to erase the word alone out of the doctrine of Justification by Faith, we should not be surprised at the readiness, when the pressure from the other extreme was strongest, with which similar concessions to the detriment of sound doctrine were not only proposed, but forced with violence upon the churches. — Henry Eyster Jacobs, from “The Lutheran Confessions: A Brief Introduction”

In republishing the Formula of Concord, we seek to introduce this treasure of the Faith to a new generation of those seeking authentic spirituality.

Henry Eyster Jacobs (1844-1932) served as Professor of Systematic Theology and President of the Lutheran Seminary at Philadelphia. He was president of his church’s board of foreign missions, and edited the Lutheran Church Review, the Lutheran Commentary, and the Lutheran Cyclopedia. He wrote and translated many books.

The Lutheran Library Publishing Ministry finds, restores and republishes good, readable books from Lutheran authors and those of other sound Christian traditions. All titles are available at little to no cost in proofread and freshly typeset editions. Many free e-books are available at our website LutheranLibrary.org. Please enjoy this book and let others know about this completely volunteer service to God’s people. May the Lord bless you and bring you peace.